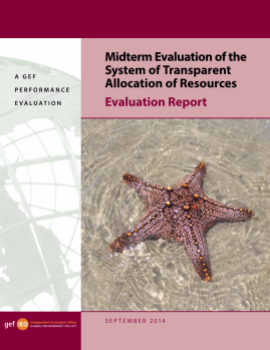 The GEF piloted a Resource Allocation Framework (RAF) during its GEF-4 replenishment period to allocate resources to countries in a transparent and consistent manner based on global environmental priorities and country capacities, policies and practices relevant to successful implementation of GEF projects. Indicative country allocations under RAF covered activities in the climate change and biodiversity focal areas. Prior to implementation of Resource Allocation Framework (RAF) in fiscal year 2007, GEF had provided its resources to proposals based on a first come first serve basis where the proposals met the requisite quality standards and sufficient GEF resources were available. In 2009, the GEF Evaluation Office conducted a Mid-Term Review of the RAF (RAF-MTR) and identified several areas where the RAF could be improved.

The GEF Secretariat subsequently developed several proposals to address the weaknesses identified in the RAF-MTR. In its November 2009 meeting, the GEF Council approved changes in the design of RAF - now rechristened as System for Transparent Allocation of Resources (STAR) - and decided to extend its coverage to activities in the land degradation focal area. In June 2010, the GEF Council approved the operational procedures for STAR and the implementation of STAR begun in July 2010. The GEF Council has requested the Evaluation Office conduct a mid-term evaluation of STAR to provide feedback on STAR's design and implementation.

In response to the Council's request, the Office is undertaking an evaluation to assess the quality of STAR's design and implementation, and its effects on the GEF portfolio. The evaluation assesses the extent to which STAR is meeting its objectives and uses performance under RAF as a benchmark for comparison. The evaluation also assesses the extent to which the lessons presented in RAF-MTR, and the subsequent Council decisions, have been addressed through STAR.

So far the Council Working Paper of the evaluation (GEF/ME/C.45/04) and four technical papers that cover some of the areas addressed by the evaluation have been completed. Publication of the final report is expected in FY2014.