Evaluation of Gender Mainstreaming in the GEF 2017 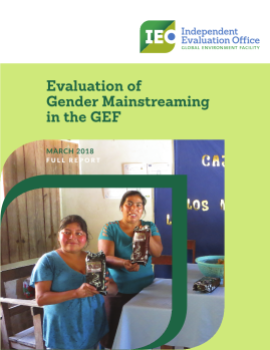 The GEF Policy on Gender Mainstreaming came into effect when it was adopted by the GEF Council members at 40th Council Meeting in May 2011. The policy was developed from principles and safeguards dating back to the 1996 Council document Public Involvement in GEF Projects (GEF/C.7/6), the key GEF policy that related specifically to social issues, including gender. The 2011 gender policy was initially adopted as Annex II of the GEF Policies on Environmental and Social Safeguards Standards and Gender Mainstreaming (GEF/C.40/10/Rev.1). The GEF Secretariat clarified parts of the policy to reflect Council deliberations and issued it as a stand-alone policy document (GEF/SD/PL/02) in May 2012.

The objectives of the OPS6 Sub-study on Gender Mainstreaming in the GEF are to:

The findings, conclusions and recommendations of the sub-study will inform OPS6.