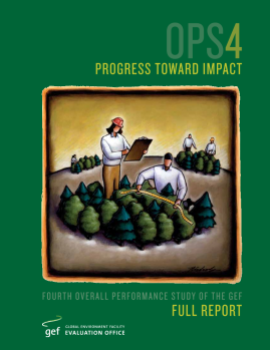 Every four years, the Global Environment Facility (GEF) is replenished by its donors. Each replenishment process has been informed by independent overall performance studies of the GEF. These studies have developed into authoritative reviews of the state of the art and of available knowledge on the functioning and results of the GEF. Previous reviews were undertaken by teams of independent experts; this Fourth Overall Performance Study (OPS4) was, for the first time in the study series' history, undertaken by a GEF entity itself: the GEF Evaluation Office. This authorship stems from the recognition that the Office — which became independent in 2004 and from that point reported directly to the GEF Council — could provide a perspective independent from that of the Secretariat, the GEF Agencies, GEF donors and recipients, and otherGEF partners and stakeholders.

Another first for the study series is that OPS4 tackles the issue of the impact of completed GEF projects. It is clear that the GEF cannot, on its own, bring about solutions to the major global environmental problems of our time. The amount of funding is simply not enough, and these solutions have to be accomplished by the governments and local communities of recipient countries and through actions in the developed world. However, evaluative evidence shows that most of the GEF's finished projects have achieved satisfactory progress toward impact. When the follow-up is in place that ensures the up-scaling of these achievements, longer term effects and impacts can be realized.

Given the comparatively small role that the GEF can play, it has to be catalytic to ensure that any success will be replicated on a scale that will make a difference. Evaluative evidence on this catalytic role shows that the GEF modalities will strongly support up-scaling: first, the enabling environment is created through foundational interventions, in which regulatory frameworks, policies, and national priorities are developed; then demonstration of new technologies, market changes, or new approaches to interaction with the environment are put in place; and, lastly, investments ensure the national implementation or up-scaling of these new approaches. Unfortunately, the same evidence reveals that the GEF did not have sufficient funds to apply all of these modalities in all recipient countries. Least developed countries and small island developing states especially have not progressed far in terms of demonstration and investment.

The First Decade of the GEF (OPS2)